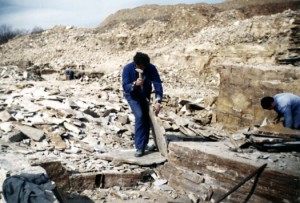 Gneiss is a type of metamorphic rock which is characterized by the distribution of minerals inside it, in sheet like structures which are clearly seen in small pieces or viewed under a microscope.
According to its origin, gneiss is subdivided into orthogneiss (of magmatic origin of the protolith, which is the orginal rock material), and paragneiss (of sediment origin of the protolith). It contains small amounts of quartz, biotite, muscovite, amphibole, pyroxene, garnet, sillimanite, etc.
Gneiss is formed when sedimentary or volcanic rocks are subjected to excessive temperature and pressure.When such a development occurs, any traces of the initial rock practically disappear.

Gneiss is distinguished from other rocks because of the bands inside, which are due to the non-uniform distribution of the minerals during its formation, and therefore the bands differ in width.

In suitable conditions, gneiss can be recrystallized into granite.That can be achieved because of their similar structures.

In northern Canadian territories, gneiss has been discovered which is determined by scientists to date back to the Hadean period, about 4 billion years ago. As the gneiss was found on the stony bottom of the Acasta river, about 300 km away north from Yellowknife, it is also known as Acasta gneiss.

Gneiss is so abundant in the lower layer of the earth’s crust that if drilling is carried out at any place on the planet, there is a high likelihood the drillers will come across gneiss. The reason for that is that gneiss is the main rock on large metamorphic surfaces.

The word “gneiss” is derived from a German verb from the Middle High German language period (the language was used in the period between the 11 and the 14 centuries) and means “ sparkling” or ”light”.

An additional feature of gneiss is the alternation of light and dark bands which is due to the light minerals contained, such as feldspar, quartz and muscovite, and dark minerals such as pyroxene and olivine.

Gneiss is formed from volcanic rock, clay schists or granites. One of the minerals which has the largest availability in gneiss is quartz, which some petrographists consider its major component. Another mineral frequently contained in gneiss is feldspar.

The bands that were formed in gneiss are due to the presence of different minerals which are parts of its structure and are between 7 and 10 in number. These bands make it a very attractive material which is preferred in construction as cladding stone.

The world “gneiss” was first used in German sources towards the middle of the 18th century. In the English language, the world has been in use since 1757.

Gneiss rocks which are formed from sedimentary rocks, are called paragneiss, and those that are of magmatic origin are called orthogneiss.

Gneiss is often mistaken for schist rocks, because both types are metamorphic rocks which show schists and layers, but gneiss has grainier structure and does not split. The difference between gneiss and schist rocks is very small.

Some of the oldest stones discovered on earth are gneiss stones.

The use of gneiss in construction is related to the building and cladding of buildings, staircases, fences and pavements.
It is also used for interior and exterior decoration, for different landscaping solutions in parks and gardens, and also for tombstones.