The word “gneiss” comes from German and means “spark” – a name received because of the sparkling effect of this rock, characterized by its strength, non-slip surface, resistance to temperature changes and a variety of colors in its mineral composition. These advantages determine its prominent place among the materials used in construction, for original and natural exterior and interior design solutions.

History of the formation of gneiss

Gneiss was formed by the transformation of old rocks under the influence of heat and pressure under the earth’s surface. It is believed that this happened 1.7 billion years ago, with the collision of two continents, which pushed sandstone under the earth’s surface and heated it. The minerals within it crystallized again and separated into layers. Molten granite penetrated inside the now formed gneiss, forming a layer that later deformed in a zigzag form.

Essential minerals that make up gneiss

And small amounts of other minerals 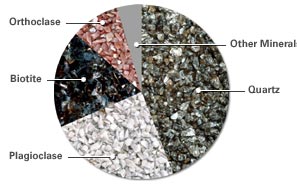 Quartz particles in the composition of gneiss are grainy and lenticular, white or gray in color and sometimes reddish or bluish. The word is also of German origin (twarc) and means “hard”. Its chemical formula is SiO2 (silicon dioxide). This is one of the most common minerals – makes up about 12% of Earth’s crust. In its pure form its colorless or white – due to cracks or crystal defects inside it, but impurities of other minerals, mainly iron oxides, give it a variety of shades. 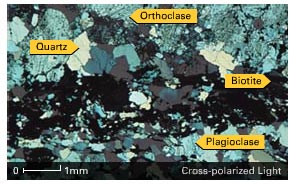 The name of this mineral is of Greek origin from the words “oblique” and “fracture”. The layers in this mineral are at an angle, which differs from the right. It’s very difficult to break the plagioclase accurately, that’s why in ancient times they didn’t use it as much – it’s processing was very difficult. It consists of two components – albite and anorthosite. The color of plagioclase is white or gray, sometimes with a green tint or a darker to black when there are iron ore minerals. Its hardness is very high.

Some varieties of plagioclase are used as substitutes for precious gemstones: labradorite, andesite, aventurine (also known as sunstone) and albite. Albitine crystals have a beautiful shine that doesn’t fade for dozens of years and are solid. The labradorite has a beautiful greenish hue; it’s often used for the cladding of buildings, for interior decorations and monuments.

This mineral is named after the French physicist Jean-Baptiste Biot. It’s a widespread mineral, compiling 4% of Earth’s crust. It occupies an intermediate space between two types of pure micas – pure magnesium and pure iron, and occurs as a basic rock-forming element in igneous rocks. In the distant past biotin was obtained by the crystallization of magma. The main properties of this mineral are glass luster and elasticity. With the help of biotin it can be determined the age and conditions under which mountain formations were formed. The most beautiful specimens of minerals are valuable to collectors.

The orthoclase belongs to silicates, more precisely to the sub-group of feldspars. Its colors range from white, pink, to yellowish or gray. It’s a widespread mineral mainly in mountain ranges. It is believed that it has positive effects on the nervous system and relaxes. Legend says that it can darken if the wearer’s feelings of love go away, but wearing it can revive the love.